According to her own account, Susie Garretson (as her friends knew her then) dreamed of a Book Arts Center at Wells while she was a still a student. I don’t know how familiar she was at that time with the work and reputation of Victor Hammer, who had left Wells in 1948, but I suspect she was well aware of Victor and perhaps (as so many have been) inspired by his example. Whatever its origin in fact and vision, Susan Garretson Swartzburg, Assistant Librarian for Collection Management and Preservation Specialist at Rutgers University, arrived at Wells, in company with Jane Webster Pearce ‘32, in the Fall of 1992 on a solemn mission. She was resolutely determined to do whatever was necessary to realize her dream 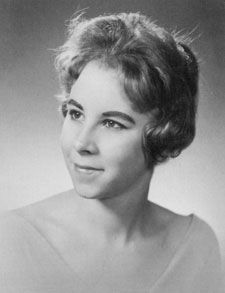 That realization was not long in coming. In late 1992, Jane donated her entire fine arts bindery and bookbinding library to the college; she also arranged for an endowment to support a Binder-in-Residence. (link to Bindery). Robert Doherty (link to Doherty), after informing Wells Librarian Jeri Vargo that he was eager to perpetuate his friend

Victor’s legacy at Wells, volunteered expertise, wide experience, and a wealth of materials.

The official Inauguration of the Wells Book Arts Center took place in April 1993, and Barbara E. Kretzmann, having been initially contacted by Susan, became the first Binder-in-Residence that Fall. In October 1993, the Book Arts Center sponsored its first symposium, “Honoring the Life and Work of Victor Hammer.” This highly-successful gathering was followed in the spring of 1995 by another equally successful symposium, “Bookbinding and the Book Arts.”

Susan Garretson Swartzburg was everywhere in evidence during this period, and throughout the formative years that followed, both as an essential member of the Book

Arts Center’s Advisory Board and as a resourceful agent and friend always available and eager to do whatever needed to be done. A tireless advocate for everything and everyone with any connection to the book arts at Wells, she lobbied, cajoled, argued, explained; networked endlessly, not just among classmates and Wells alumnae, but among her fellow book arts professionals. She donated funds and arranged for donations by others. She organized events, and arranged for speakers. She was unstoppable, unflappable, and imperturbable. Those who watched were in awe of her dedication, commitment, and inexhaustible energy; they even teased her about being “obsessed”!

Her untimely death at the age of 57 in October 1996, after having fallen ill on a summer trip with library colleagues to China, was a blow to the Book Arts Center from which it may never fully recover. One can only imagine what further contributions Susan might have made; what legions of new supporters, for example, she might have drawn to the Center if she could have sustained her promotional and other efforts on its behalf. Yet, she did live long enough to see the institution she somehow dreamed into being begin to flourish, and she would have been greatly gratified by its advances since that time.

The semi-annual Susan Garretson Swartzburg ‘60 Book Arts Lecture Series, founded by her in 1994 as a memorial to her father, bears her own name now as a grateful memorial to her from the Book Arts Center and Wells College. Still, only those who witnessed her unrelenting, inspired, indeed, heroic actions during those early years can have any adequate idea of the extent and scope of her contributions, any conception of the true legacy Susie left to the Wells College Book Arts Center, and therefore to all who continue to benefit from it.