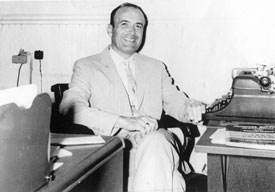 In 1985, I was given a font of script type that was the most horrible type ever conceived by man. I could find no trace of it in any of the specimen books. I ran a proof of it in The Printer, stating that anyone who could name it could have it. Bob Greenlee was the only person that came up with a name. (I’ve forgotten it).

This began a friendship, since I learned that Bob was collecting 19th century type. Each time I found a new one that he didn’t have, I sent it to him. In the mid-nineties, I was on my way to visit my son in Washington state for Thanksgiving and decided to go by way of Calumet, Michigan, and stop to visit with Bob. This was quite an experience. Calumet is actually part of the United States, though I began to wonder as I drove across Michigan. The further I went, the deeper the snow became. Near the Arctic Circle, I eventually found Calumet and was treated royally by the Greenlees.

Several years later, during a winter while I was teaching in Florida, I called Bob to ask if he had a particular calendar set of type. His wife Eloise answered the phone. When I asked if Bob was available, she responded that he was out digging out the tunnel. She wasn’t kidding! They have so much snow there that the ground never actually freezes!

Bob Greenlee was a master technician. He could print on both sides of 50 pound coated two-sided paper with no impression showing through, and his skill with kiss register on a C&P clunker was astounding. He really loved to print and he loved the process. Nothing was too complex to undertake. While he owned and managed a series of small newspapers in the mid and far west, he always maintained a hands-on challenge at the presses with ink under his finger nails.

The year before Bob died, he and Eloise stopped by the college on their way to a Wayzgoose in Hartford in search of more nineteenth century type. To our great good fortune, after Bob’s death in the fall of 1999, Eloise offered to place Bob’s world-class collection at Wells where it has already found good use and will enchant students of printing for many years to come. One of the odd types in Bob’s collection is named Virile, in two sizes. I offer no further explanation.