In the early 1960s I was introduced to Victor Hammer by Dr. Justus Bier, noted Medievalist, while on the faculty of the University of  Louisville, in Louisville, Kentucky. During the following years, Victor was most gracious in allowing me to bring my students to visit his shop in Lexington. It was a rich and heady experience for both me and my students. I left Louisville in 1972. 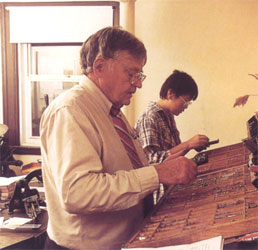 In 1984 I moved to Ithaca, and a few years later, I visited Wells to see if there was anything left from the Hammer years at Wells where Victor reestablished the Stamperia Del Santucchio and set up the Wells College Press. On this visit, I learned that the Library had a small archive of Hammer material and the college had the Washington Press that Hammer and his son Jakob used in printing. I wrote a letter to the then President of Wells, Patti Peterson, asking if the Hammer material might be available. The reply was essentially, “How much is it worth and can we sell it?” This was not quite what I wanted to hear and I decided to let things lie.

In 1991, at a birthday party for a mutual friend, I met Jeri Vargo, who had recently become the Librarian at Wells. In the course of conversation, I asked Jeri if anything had been done about the Hammer material, explaining my interest. Jeri arranged an appointment for the
two of us to meet with Linda Rinker, Dean of the College. Dean Rinker agreed to reestablish the Wells College Press and chose English Professor Bruce Bennett to head this project. Bennett, a poet, directed the creative writing program at Wells and became the “official” faculty/administrator for the project. I was given the title of Printer-in-Residence.

The terms were that the college would not put a dime into this project. A space was found for the work to begin. The Washington press was on the third floor of Morgan Hall and weighed about 1200 pounds. I asked an experienced friend how to move this monster. His response was, when he had a problem like this, he’d call the local volunteer fire department and say, “I want to make a contribution to the fire department, could you
send a couple of guys over to pick it up?” I related this story to Jeri, who responded, “My roommate is a volunteer on the fire department!” A few weeks later, the press was moved to a rat hole in Main by the Aurora Fire Department.

The Washington Press was unusable. All its moving parts were frozen. I was able to find someone to restore it to working condition, but the assigned space was not conducive to using this press. I found a Vandercook Press and began printing. The type that was preserved, through the good graces of Reverend Collar, a priest in the village who had been a close friend of Victor’s, turned out to be the sole surviving Spiral, designed by Joseph Blumenthal in the 1930s. When Theo Rehak learned of  this discovery, he sent a one sentence admonition, “Resist the temptation to use it!”

At this time, good fortune arrived from the New York Newspapers Foundation. In response to our application, the Foundation gave Wells College Press a one-time gift of $15,000. Concurrent with this gift was one from Carolyn Hammer, who delivered the original punches and matricies of several of the types designed and cut by Victor. This gift from
Carolyn was accompanied by her designation of Wells as the “official archives” for Victor’s printing works. In addition to the punches and matricies, Carolyn contributed several important documents from Victor’s early work. For reasons unknown to me, this designation was subsequently altered by Carolyn’s nephew, Gay Reading, and later material intended to come to Wells was sent instead to the Library of Congress.

Upon receipt of the Newspaper Foundation gift, I asked Theo Rehak to cast the Hammer Aurora Type. This was cut by Hammer in the early 1940s for American Type Foundry, but WWII and other factors delayed its introduction. Theo cast the Aurora and also the American Uncial Types from the original mats which belong to Wells.

In 1993, I organized a symposium to honor Victor called, “Victor Hammer: The Man And His Work.” This international symposium presented a wide  range of views of publishing, spanning from the small private publisher, the typecaster, and the Hammer scholarship, to the vast range of work by TIME/LIFE publishing. The symposium also included booksellers and printing and binding equipment dealers who plied their trade. Among many other noteworthy presentations was a brilliant talk by David Pankow, Librarian for the Cary Collection at Rochester Institute of Technology. It was great fun for all. For this symposium, the college received a $4000 grant from the publisher Henry Regnery allowing me to hire David Wall, then working at RIT, to plan and organize the complexities of the symposium.

Two years later, Barbara Kretzmann , Binder-in-Residence, organized a symposium on Binding that was also a great success and brought some of the country’s leading binders to display and talk about their work.

The first groups of students to work in the Book Arts Center responded enthusiastically to the idea and experience of printing and binding, and several fine things were printed. The Press (now officially Wells College Press) began printing and publishing work for some of the writers from the college’s Visiting Writers Series, a program directed by Professor Bennett. I don’t recall the exact date, but as the Press’s activities expanded, the college administration made the decision that the rat hole, which flooded frequently, was not the best space for the Book Arts Center. After a relatively short transition period, the Center, consisting of the former Hammer Press and the Bindery, later renamed in honor of its donor Jane  Pearce, were moved to the first floor of Morgan. The new facility was
marvelous, spacious and perfectly suited for its new purposes. It was more than I ever anticipated.

Sometime in the mid 1990s, I suggested that the College form a visiting committee with the sole objective of helping the emerging Book Arts Center find resources to carry out the educational program of the Center. This committee was established, floundered for a while, but eventually, as the Wells College Book Art Center Board of Visitors, became very
important in the establishment and funding of the Hammer Fellowship. Special thanks is due to one of the Visitors, David Stamm, and the Delmas Foundation.

In 1998, I had suggested that the college establish the Victor Hammer Fellowship. The plan was for a two year fellowship, bringing a young book artist to Wells, and paying a stipend. The Fellow would teach printing and the history of the book, and, under the auspices of Michael and Winifred Bixler, would spend two days each week as an apprentice at their Press and Letterfoundry in Skaneateles. I again sought the aid of David Wall,  who was then teaching at Iowa, this time asking him to find a candidate for the first fellowship. David happily suggested one of Iowa’s outstanding current students, Jocelyn Webb. I bought Jocelyn a round trip ticket to Aurora and with great trepidation and overwhelming doubt, I introduced her to the President and the Dean along with the Hammer Fellowship plan. In the  course of my presentation, Dean Rinker suggested we might wait another  year to implement this plan. To my surprise, President Ryerson slammed her  hand on the table and said, “No! If we wait another year, it won’t be any different. Let’s do it now!” I left that meeting with my knees shaking and in an euphoric
state of disbelief. WOW! We were off and running.

Along the way, I managed to acquire additional equipment and materials of the printer’s craft. We received a very substantial gift of printing equipment  from Alfred University. This included the Universal 1 Vandercook, a powered  press that allowed us to enter into higher levels of manufacturing books. Other gifts came from various sources and individuals, and, in 2000, we received the world-class Greenlee collection of nineteenth century type, dingbats and ornaments.

Professor Bennett was an extraordinary person to work with. We did many important things together, and his support and guidance were a tremendous help in making this book arts center unmatched in all of North America. This was especially rewarding to me because Victor Hammer, one of the great men in the art of the book, now lives once more at Wells College, and my honor and gratitude to him for his generosity toward me has been made into a more permanent and active tribute to him.