First Reader (An Homage to David Berman)
by Bruce Bennett
2017. 6″ x 9″ hand stitched paper wraps.
100 copies signed by the author and numbered
Each copy features a unique marbled paper by Nancy Gil who also hand set and printed the entire book on a Vandercook Proofing press.

First Reader chronicles one side of a decades-long shared friendship in poetry. David Berman and Bruce Bennett met in Archibald MacLeish’s legendary creative writing course English S at Harvard in the Fall of 1961, and were the first readers of each other’s poems until David passed away in June, 2017. Bruce has written of David and his work: “He was an exquisite and prolific formal poet, and an exacting critic, who was always in my mind when I wrote. He was also, always, a most loyal and generous friend.” 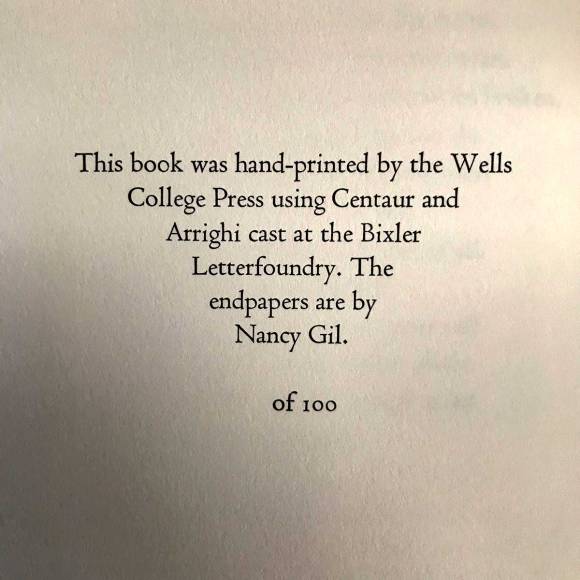 Here are some things that stood out for me about David. He read Latin for pleasure. With regard to certain areas of knowledge, he was among the most intellectually curious people I have known. His appetite for information, including arcane information, was insatiable. He was a gourmet and a connoisseur of wine and, perhaps especially, champagne, so one was indeed fortunate to share a meal with him – and “indeed” was among his favorite words. (“Memorable” was another, and was often applied to meals.) He knew the Bible, both Old and New Testament, practically by heart, and often mulled, discoursed on, and wrote about Biblical themes. If I had a question, any question at all, relating to religion or the Bible, I knew I could rely on David to answer it, and in considerable, and quite specific, detail.

He was an exquisite, and prolific, formal poet, who wrote poetry all his life, and was blessed to find his community, and indeed his spiritual and artistic home, among his fellow Powow River Poets, a distinguished group which meets monthly in Newburyport, Massachusetts. He was an exacting critic, who took the vocation of being a critic very seriously, and who was therefore, as a critic, knowledgeable, sharp, utterly discerning, and invariably just. (Which isn’t to say I always agreed with him, but that did not matter in the least. One doesn’t need to agree with a First Reader. One just needs to take another very close look.) He possessed, and reveled in exhibiting, an extraordinary, one could almost say Borgesian, memory, frequently dazzling others with instant recall of abstruse historical and other facts, dates, and, of course, details of the law, which was one gift that made him a world-class lawyer.

David was an extraordinarily private and reserved person. One always knew, or sensed, the boundaries, yet, when he was particularly amused by something, he would occasionally laugh uncontrollably, a laughing fit which was, needless to say, infectious to whomever he was sharing the joke with. Though I knew him for more than fifty-six years, in many ways he remained something of an enigma to me, but at all times a unique and precious enigma. Though I didn’t see him nearly as often as I would have liked to, and should have, during the last several years, he was constantly in my mind, — and always in my mind when I wrote, — as an abiding and cherished presence.

Finally, and I can say this simply, he was a most loyal and generous friend.